The past five days (still five to go!) have been super-relaxing and pretty satisfying. We haven’t done a whole lot of getting out and about, but there has been a bit of cooking, a bit of pottering, a bit of catching up on chores, a bit of sitting about, a lot of golf (for some), a bit of knitting – and we’ve completed (or are in the process of completing) some long overdue Palace-ly maintenance.

Yesterday I attended to the garden (otherwise known as the couple of pots on the balconies) – re-potting, added couple of new plants, wrangling the faux compost bin**.

As part of this I bid goodbye to the lemon tree and I hereby swear that I will never again attempt to grow one – lemons in pots simply don’t thrive for us and are a magnet for any pest that happens to be wandering by. Despite my no passengers vow of years ago, amongst other non-productive plants, I now have a couple of goblin trees which I hope will eventually provide some partial shade for the herbs. 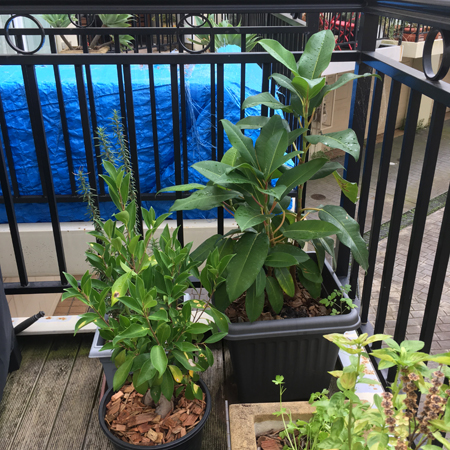 remember these? the plant at the back right is where we’re at exactly 3 years later

And on the upper balcony: 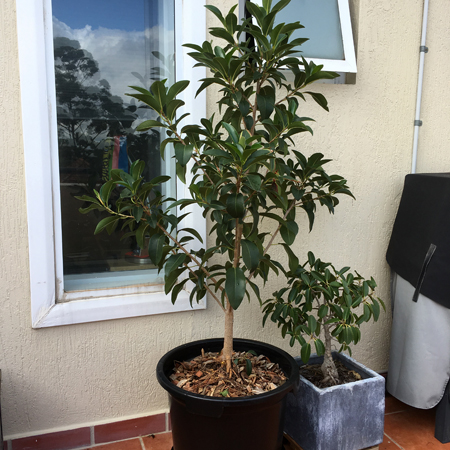 It all looks very tidy and pleasing. I’ve come to terms with the idea that life right now means I’m not going to have a terribly productive garden.

Don has spent the last two days filling those holes left by the air-conditioning installers. We contemplated having this done by a professional, but I’ve read enough home improvement stuff on the InformationSuperhighway which suggested this was something we could tackle. My view is that our hard-earned is much better spent toward dinners or holidays (or into the fund to have the carpet replaced).

And we did tackle it! Of course, when I say we I mean Don. I’m fairly sure I also could have turned my hand to it, though probably not anywhere near as efficiently. 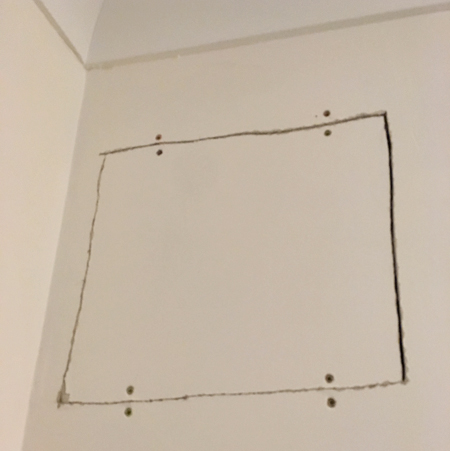 Achievement unlocked! And the repairs will be one of many delights for future owners to discover.

While Don was occupied repairing holes, I attached a motion controlled light inside the deep cupboard where we store our pantry goods. We did have a tiny battery operated light, but it had to be turned on and the light was pretty week. This new light has changed everything – so bright!

I took the opportunity to write down the sauces, vinegars and oils, so that I can attach a list to the inside of the cupboard – should save a rummaging through every time we are preparing a shopping list:

We have almost as much vinegar as we have sugar.

Each morning of the break I’ve been sitting down for an hour or so and attempting to get my head above water on SML admin tasks that had very much fallen by the wayside. This is pretty important stuff which has travelled with me for years into a bunch of different roles and which makes absolutely no sense for me to perform. It’s quite detailed, meticulous work and stopped making sense for me to do this about 2 roles ago (I’m all about fluff and big picture now), but for various quite boring organisational reasons I’ve held onto it. But no longer! I’ll be jettisoning it permanently to Arnie-long-ago-minion.

It might seem a dreadful waste of my TEN GLORIOUS DAYS but Future Me will be delighted that I’ve put in the time. As soon as I get back to the office I can start finalising the handover. And it would have been a really dick move to flick Arnie about 6 months worth of backlog. I really want to set him up for success – and never, ever have to do this myself again!

The sitting down quietly each morning has been a pretty good discipline actually. I’m calmly ploughing through things in a way I would not be able to in a regular workday. Maybe I need to do this with personal projects?

** five years and still going strong! Strong in a quite slimey and stinky way.

2 thoughts on “five days in”