I spent the majority of my last two Saturdays attending an intermediate level art glass class.

I still have no huge interest in glass, but I enjoyed the beginners class and thought it might be fun to stretch myself.

Nine of us were spread across two work tables – a table of women who all knew each other well and were quite experienced in glass; and a table of relative newbies who had only done one or two classes before.

They were a great bunch of people and unlike my bangle class, there was a really positive and energetic vibe.

Watching how everyone approached the class over the two days was absolutely fascinating.

Rather than jump into making *stuff*, we talked a lot about experimentation, iteration and creative practice. Our teacher led us through a bunch of exercises where we identified words or phrases in response to questions about what inspires us creatively, what resonated about glass, what we loved about art, what we wanted our art or making to reflect.

We then narrowed those down to one word that we felt encapsulated our approach to creativity.

I eventually settled on “playful” – or more correctly was guided to playful. It had evolved from “impractical” which I wasn’t entirely satisfied with anyway. I was trying to get at the idea of creative expression without the need to have something practical or useful at the end.

Little did we know that our chosen word would be the theme for our making! Playful was not really where I thought I’d be headed – but I was happy enough to chuck my ideas out the window and just go with the process.

We then made a few sketches to reflect different approaches to our word. This was quite a lot harder than you’d think!

The goal of the day was to complete three smallish glass panels, which we would then deconstruct and include in a larger wedge in the second session.

Trying to stick to the playful theme, I played around with bold, graphic shapes and bright colours. Despite my love for the kind of layered mosaic-style stuff that I made in my first class, I tried to also stretch myself with paint and frit (which is basically tiny glass fragments that all melt together in the kiln). I guess it was sort of playful? 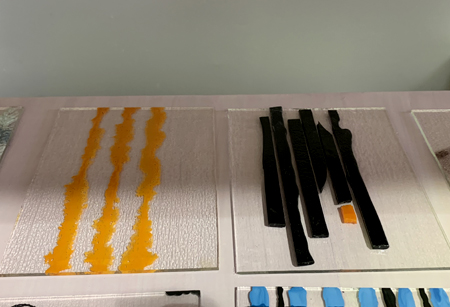 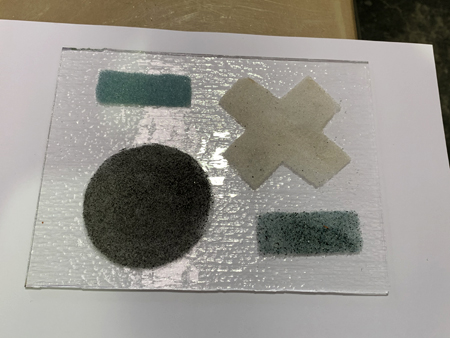 I was reasonably pleased with them, but obviously had no idea what effect the firing would have.

Fortunately two of my panels worked as I’d hoped. Sadly that white cross completely disappeared in the firing.

But what to do about deconstructing and reconstructing into a wedge? I had been mulling over ideas all week, but they weren’t really workable when confronted by the results (or with my abilities!).

Then our teacher threw more options into the mix – we could make a cube or a block instead of a wedge. At this point I became slightly paralysed with indecision and had to do quite a bit of quick(ish) thinking.

After a lot of arranging and rearranging, I settled on a layered block inside a clear block. I did not have enough clear glass sheets (expensive stuff!), so used a lot of glass fragments to make my layers. This was super time consuming, but we had hours – what could possibly go wrong? 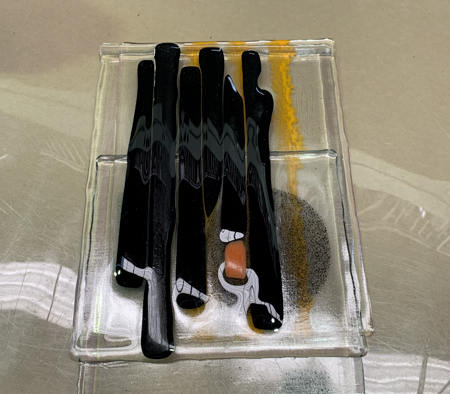 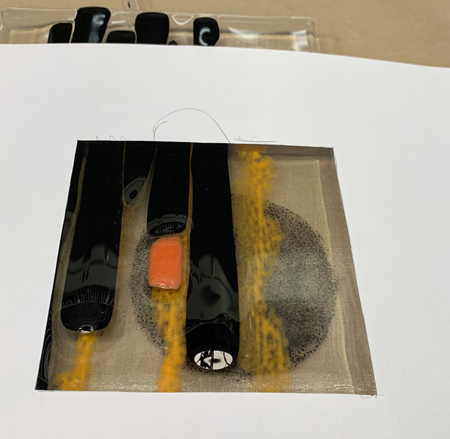 maybe this will work? 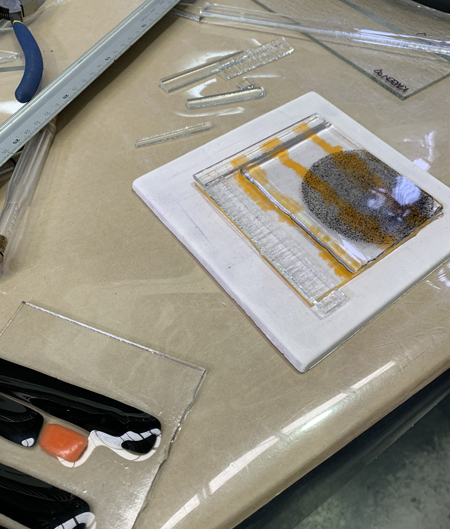 Of course this idea was WAY too over-ambitious and I was still finishing up the construction of my block beyond the end of the allotted class time when most people had made two pieces! I became increasingly cavalier with glass placement as time ticked down and I’d be surprised if the end product contained any right angles at all.

It rather felt like being on a reality tv programme. So much pressure! So many tiny cuts on my fingers! So much blood! And just like on television, as I carried my piece to the kiln, a piece fell off and shattered – forcing me to rapidly find and cut another clear piece. Several of my classmates were extremely lovely – encouraging me and bringing me bits to help me finish!

Alas I was so time-crunched there was no time to take progress pix.

I am absolutely confident my block will be a disaster.