In the last weeks of work at the Project Sulfur offices, there had been so many government announcements the inadvisability of various travel things and outright bans of other travel things that it was hard to keep up.

I was somewhat surprised to see a ship in port when I arrived at Circular Quay one morning because I could have sworn I’d read that cruise ships were no longer permitted to dock.

Since working at the good end of town, I’ve been taking a daily (when I’m there) photo of the harbour at the same spot with the plan to turn it into some sort of project. 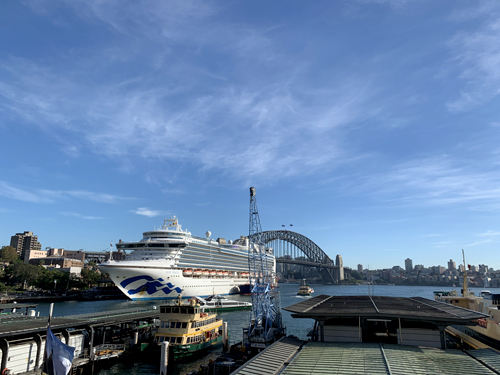 I’d been expecting to have an uninterrupted run of bridge photos for a while, but figured I’d likely misinterpreted the ships announcement, took my photo and carried on.

I kept my distance from the disembarking passengers who were milling about the station because at that point we becoming careful about social distancing – and we were becoming increasingly aware that cruise ships are giant floating disease incubators and particularly favoured by covid-19.

My instinct to be cautious was the correct one – the ship was the now infamous Ruby Princess.

That was the second last photo I took in my series. The last was taken the next day – of another ship in port, with of course more (though less than Ruby) coronavirus on board.

Much safer at home, but I do regret the end of the series.