What’s up with all that reflection and thinking? Lately there’s been a lot of it.

It started with the realisation that my my July plan to eliminate all snacks from my diet on top of my existing efforts at intermittent fasting was really disordered and kind of insane.

So I started reading about emotional/binge-eating, which lead me to the tons of podcasts and blogs on intuitive eating. This eventually landed me at the original intuitive eating text – Tribole and Resch: Intuitive Eating.**

Lots of this resonated with me. While I am really quite happy with my current size, my thinking around remaining slender and food generally is completely bonkers. I spotted myself in many of the examples mentioned in the book – identifying food as bad, last suppers (eat all the chips now and tomorrow I’ll be good!), treating minor slips in “good eating” as excuses to eat All The Things (I’ve had a piece of chocolate, I may as well eat the family-sized block | I’ve had a spoon of ice-cream, so I may as well eat the tub – in one sitting!). Wow. I could go on and on.

But this example from chapter 2 really hit home for other reasons:

Ted clearly did not see himself as a dieter, merely as a careful eater. Yet it turned out that he was an unconscious dieter. Although Ted was not actively dieting, he was undereating to a level where he was nearly passing out in the afternoon … In the mornings he would go for an intense hilly bike ride for one hour, then come home and eat a small breakfast. Lunch was usually a salad with iced tea … By suppertime, his body would be screaming for food. Ted was not only in severe calorie deficit, but also carbohydrate deprived. Evenings turned into a food fest! Ted thought he had a “food volume” problem with a strong sweet tooth. In reality, he had an unconscious diet mentality that biologically triggered his night eating and sweet tooth.

Yikes! I totally am Ted. Or a fairly close approximation of Ted. However unlike me, Ted was actually eating breakfast and lunch – however meagre. All I was consuming every day until I arrived home in the evening was two coffees (one french-press with a splash of milk, one macchiato), a pot of green tea and maybe the occasional orange.

Gosh – maybe my increasing ditziness and struggles to think clearly are not from old age and stress, but simply because I’m not fuelling my brain?

GAH! WHAT THE HELL WAS I THINKING?

So obviously as a first step I began eating lunch. Admittedly a pretty small lunch!

half-sandwiches are excellent when you don’t have much appetite

And then because paying $5 for half a sandwich is quite ridiculous, I’ve started making my lunch. 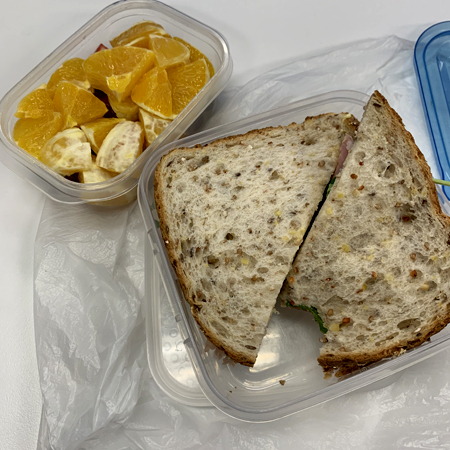 And magically, since I started this new regime, I’m no longer eating us out of house and home each evening. Please insert the eye-rolling emoji of your choice here.

I’ve still a long (long!) ways to go with this and much work to do, but I feel about 80 billion times better already – both mentally and physically.

** The book wasn’t available at either library, so I figured $6.28 wasn’t going to send me to the poor-house and bought the kindle edition.

Just wanted to high five you after reading this awesome post… this eating business is such a bloody mind-mangler at times.

Thanks Shauna! Right back at you!

It is a complete mind-mangler – why can’t I be disordered about something more boring (and less delicious)?