It’s been less than stellar couple of weeks. I’ve not been kicking terribly many goals at SML or at home and everything seems to be really difficult.

I had quite a few Action Items on the agenda this weekend and then did *something* agonising to my neck/right shoulder when I jumped out of bed this morning which put paid to a lot of that. I carry my stress in my neck and clearly TheUniverse is telling me I should just relax. Thanks Universe!

Anyway, how’s May coming along?

+ Meditate 5x mornings per week
YES! This has had absolutely no measurable effect on my mental state. Though maybe it has and it would be much worse if I hadn’t? Will keep at it – because what else would I do to time the coffee in the mornings?

+ Exercise bike 3x per week
NO! I did ride yesterday after work – for a grand total of 2x this month.

+ 2 dates with Don
Partial. The play we missed last weekend due to … well, I’m not entirely sure what it was due to … was intended to be the second date. Oops.

+ complete Total Japanese CDs 6 and 7
YES! I was surprised to discover there is only one CD remaining, I thought there were 10 in the set. I should make a plan for what’s next.
Watashi wa nihongo ga heta desu 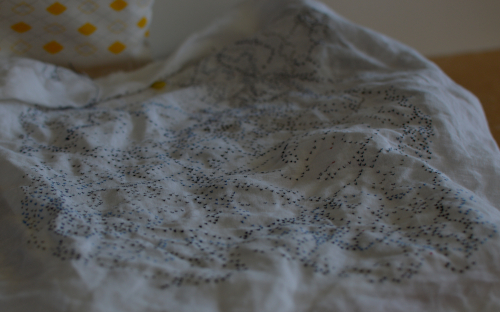 pleased with how this is coming along

+ Knitting: finish cowl (have changed pattern) | knit tension squares for planned jumper – I know, I said I would never attempt a jumper again (remind me of this when I abandon the project)
YES! | YES! And bought a whole bunch of yarn yesterday for that jumper. In the words of a quite bad film: Never say never again. 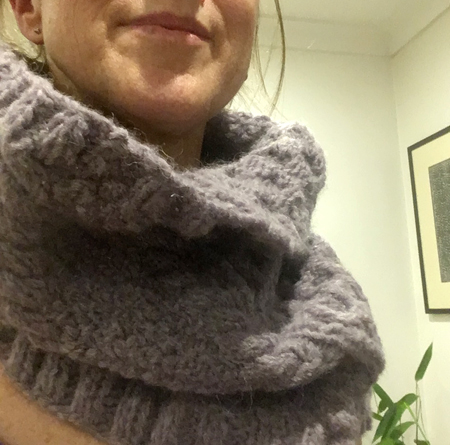 unblocked cowl. fin. (yikes the lighting in the palace is dire)

+ 2x lunchtime visits to MCA (Project Sulfur has relocated to the good end of town – there is no excuse not to visit)
Partial! One week remaining to go sit in the library (having decided that 2x MCA in a month was too much) at lunch and look at pretty books.

+ blog 4x per week
OH HELL NO! Future Me is going to be very annoyed when she reads back through the archives. Sorry, Future Me, I hope you’re a better place than I am now!

+ attend to ghastly nails 1x per week
Ah! I thought I’d forgotten something.