Here in ThePalaceOfLove we have very hard water. Or is it very soft water? Despite my advanced years I can never get the two straight in my mind. Which ever it is (hard, I think), it leaves white spots on the stainless steel pots and makes for occasionally crunchy laundry.

What it also does is leave our lovely clear kettle with a rather brown and mangy interior after continued use, so that it barely resembles the very nice product photograph below. 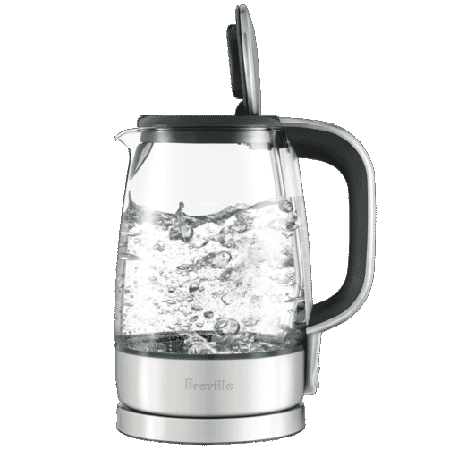 I’ve tried all manner of cleaning methods over the years – mostly involving scrubbing with various products, some natural, some not. The outcome wasn’t all that great no matter what product I used. And despite having rather skinny hands, I’d always end up with a bruise or two from trying to get at the bottom.

I eventually tried boiling white vinegar in it a few months ago and the results were spectacular. Finally it did look like the product photo! YAY! I was delighted.

I’m not the sort of person who cleans the kettle on the regular, but had resolved to do the vinegar treatment at least quarterly. And this weekend was that time – the second time I’d tried this method.

I filled it to around half way with vinegar and set to boil. Because it’s clear, I could watch the magic happen and it honestly is pretty magic to watch those stains disappear as it heats.

Until … the vinegar hit boiling point and erupted from the kettle like a boiling white vinegar fountain – all over our television and amp remote controls which live in a bamboo box on an occasional table next to the kitchen bench. All over the kitchen bench and floor. The bamboo box made a lovely boiling vinegar bath for the remotes (and some pens and other miscellany). 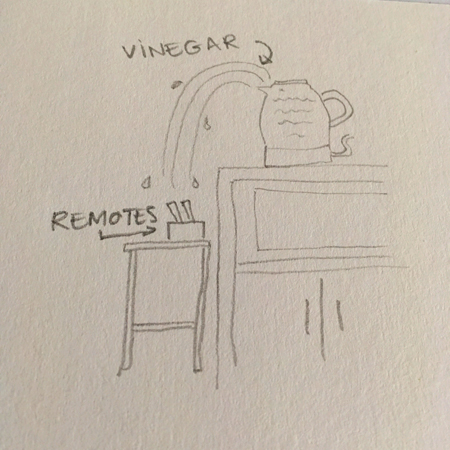 I dived for everything and managed to fling it all into the sink. Then quickly yanked the batteries from the remotes and set them to dry on a towel. Then mopped up what seemed to have turned into about 20 litres of really quite hot white vinegar.

Why this vinegar fountain didn’t happen the first time I tried this is a scientific mystery for another time.

But much later I boiled the kettle and everything was peachy – and so clear and shiny! Hurrah!

This morning when I staggered sleepily downstairs at some ungodly hour to feed the ravenous cats, I flicked on the kettle and all was not peachy (though still clear and shiny). The kettle did nothing. The power on that side of the room was out. Odd. Wandered down to the fuse box and saw the breaker had tripped. Flicked it back on, came back and switched on the kettle. Power out again.

In separate incidents I also broke a mug, inadvertently threw my tea-pot insert into the bin (which I didn’t find until hours later) and had a couple of single anniversary stitches fall out of the endless embroidery (will be a devil to work out where they came from).

ugh, I am trying to work out how to get the remains of animal bile out of new cream rug. Vinegar or bicarb seem to be solutions to most things. Can you send me your email (I have not changed numbers but did try texting you and think your number might have changed) and I will send you a bag to send me the linen…

Vinegar with scrubbing brush has worked for me for such things on elderly cream carpet. Can report that nothing works on a sisal rug except strategically placed furniture or smaller, overlaid rugs.

Just emailed! You are correct, number has changed – emailed you that too. And I will not hear of you sending me a bag, glad the ghastly thing is going to an appreciative home!