I’ve mentioned before that I’m facing more sexism now that I’m relatively senior (and the more that I veer back toward working in IT) than I ever have before.

The most recent example of this was a fairly important presentation to the SML Board asking for approval to spend $LOTS on Project Sulpur. For my sins, I’m the lead from the business side and it was my first time talking to this group about about what the business would get from all this cash. Other presenters were Bobs (Sponsor, old white man), VeryHighlyPaidConsultant (very highly paid consultant, old white man), FCFC (new program manager, old white man), Ringo (IT lead and semi-old white man) and Dita (voice of customer, 30s, sultry, gorgeous).

Prep was harrowing. Like really. Without going into the torturous details there was an enormous amount of:
✚ “you and Dita need to be the happy faces of the project!”
✚ “smile more!”
✚ “bring the sizzle (to Dita, I’m unlikely to sizzle)”
✚ “stop being negative, carolbaby”. This last in response to my, “we currently can’t do esoteric but very desirable thing X, the new system will do Y to make it all better – YAY!”. VHPC: “No, carolbaby, Ringo talks about the problems, you need to lift them up, lift them up!” Me: “LadyPenelope(CEO) did ask that we remind them of some of the issues the business is facing”. VHPC: “Ringo can do that”. Me: “but Ringo is IT?” VHPC: “no, we’ll add those issues to Ringo’s slide for him to talk to”.
✚ Me: “should Dita include a bit about us never engaged with the customers like this before and that their response has been extremely positive?” VHPC: “that’s too negative.”
✚ “don’t say that, carolbaby”
✚ “don’t say that, carolbaby”
✚ “don’t say that, carolbaby”

Not just one meeting, but 3 meetings of 3 hours. It was relentless.

I’d have thought it was perhaps just me, but Vincenzo who was also in attendance was appalled.

And then there was the “we’re tight on space, so perhaps the girls can come in and do their bits and then leave?” (while the old white men all stay – for the important serious Man bits). ARGH!

This on top of my general meh, really (really) messed with my psyche and had me in tears a couple of times in front of both Bobs “this is all so fucking sexist, I cannot even” and the long-suffering Don. Fortunately Bobs checked-himself and went in to bat a bit behind the scenes with people who matter – and good grief if clueless Bobs can see it, it must be pretty evident!

Because I am stubborn, I largely ignored VeryHighlyPaidConsultant, went with my instincts and stuck to my script of “current system bad (so bad), new things will be super-fantastic and here’s how!” for the rehearsal in front of LadyPenelope(CEO). My bit received a very big thumbs-up for hitting the right note. Stick it, VHPC.

I’m honestly in no mind to tolerate any of this sexist bullshit. Fortunately around this time there was a piece of decommissioned cake stand kicking about at SML which looked quite like a fairy wand, so I bought a fairy princess skirt and carried the wand to our final run-through. 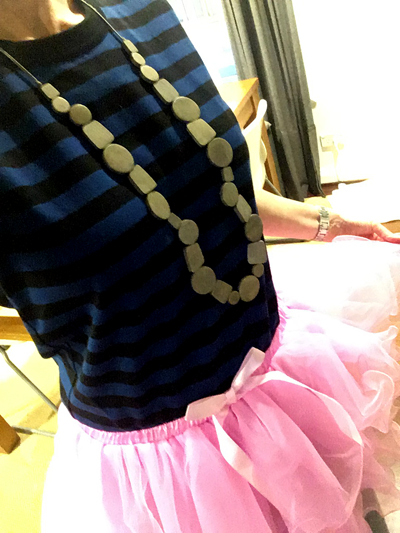 princess skirt (though not the final outfit)

And I very much made my point to the old white men. Plus, princess skirt.

Dita’s and my bits were quite well received – I was apparently funny, informative and authentic. They want us back for the next meeting.

In the meanwhile, I’m going to continue to speak out whenever I can (and a few of my fellow princesses have thanked me for fighting the good fight).