It’s a babies weekend here in Hardly land, as a consequence I am sitting on the couch using the Frankenlaptop (which, you may recall, Fenton created after cobbling two dead laptops together).

Frankenlaptop is rather light on anything other than essential software (mozilla and office) and because I am too lazy to actually locate our photoshop software, I decided to give some FOSS a bash and download the very unfortunately named GIMP. So far it works an absolute treat – for what I want it to do, which admittedly isn’t terribly complicated.

Given that I am using a computer where I can actually view all of the trackers on my blog (I had completely forgotten I had so many trackers, how vain I must appear!), I thought I’d share the most recent list of keywords: 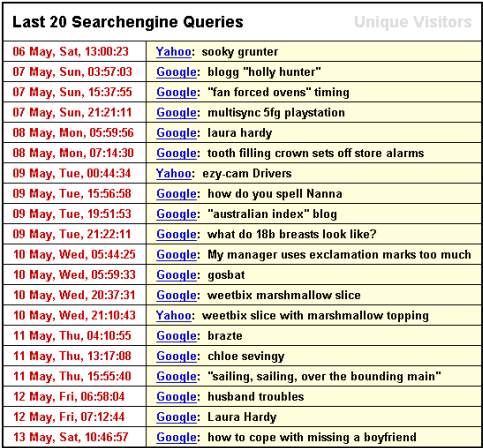 Fenton is currently in Noo York – a first visit for him (needless to say I have not been there either – because I’ve not been anywhere at all1) & he is quietly enthusiastic about it, he even went so far as to say he wouldn’t mind returning (which is high praise indeed). He is armed with a rather sizeable make-up shopping list for Nancy (prices are around half of those here) and a request for The Rockford Files Season 1 on DVD for me, because I simply cannot get enough of cool 70s television.

I’ve been feeling rather unsettled and out of sorts lately, I feel as though I’m not achieving a great deal and am beating myself up a little (well, okay, a lot) about it. Primarily – the projects (both at work & at home) in my head which I never begin, the “stuff” I stockpile “just in case” for aforesaid projects, the exercise I promise myself I will undertake, the exotic things I plan to cook.

Essentially I think I need to give myself a good mental shake & a good talking to and to throw some stuff away (I know I will feel better if I divest myself of these things – oh golly, I sound like a member of the insidious flylady cult2)

I think I need to develop something a little more sophisticated than my rather lame ascii scissors as a breaker between topics.

1I’m not one of these totally aggravating types who proclaim, “Oh, I haven’t been anywhere” and follow up with an, “but I found travelling in so much more rewarding than or ” – I truly haven’t been anywhere at all (thus exploding any misconceptions you may have held of Mrs Hardly: world traveller).

2This has to be the most wacked out thing ever (you need to scroll down to the testimonial for the full horror.