On the surface, you’d think that, unlike the UK or US, there isn’t terribly much regional variation in the Australian accent – you really can’t guess at first hearing where someone grew up.

It’s really only when you pay close attention that you notice little idiosyncrasies in pronunciation – people from Victoria tend to make an “e” sound for their “a” – “el-bum”, rather than “al-bum”, for example.

My lesbian lover and I were idly chatting about vegetables (as you do) at Marie Celeste one lazy afternoon and she pointed out a pronunciation variation that I had never noticed, but which I have become completely obsessed with. And that is the pronuciation of 0ni0n (obfuscated because pretty much everyone at Marie Celeste knows of my obsession).

My lesbian lover grew up in Newcastle and she’d noticed that people from there say “ung-yun” with a very definite “g” sound, rather than “un-yun”. She pointed out that I, too, said “ung-yun” – something I had never noticed before. I thought everyone said “ung-yun”, but they don’t! I have the greatest diificulties even pronouncing it “un-yun”, because my tongue gets all caught up at the roof of my mouth.

As I grew up in a small hick coastal town about 2 hours north of Newcastle, I became obsessed with how far this weirdness had spread. And thus, my rather twisted campaign of walking up to people at Marie Celeste (who grew up in NSW) and making them say “0ni0n” commenced.

And so I can share that:
People from Sydney say “un-yun”
The Central Coast: “un-yun”
Newcastle: “ung-yun”
My hick coastal town: “ung-yun”
Walcha: “ung-yun”
Tamworth: “ung-yun”
Age is no barrier to pronunciation.

And that was where I ran out of people who grew up in NSW to harass survey.

Here is my very lame map of the results: 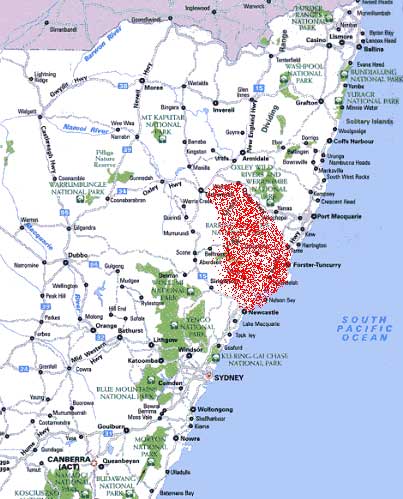 The spotty red area indicates the spread of this pronunciational weirdness (ignore the green splodges – they are national parks I think).

If you would like to contribute to the results, my obsessional self would be very pleased indeed.