Since I was a wee young lass making my own face masks from oatmeal and honey (and egg and honey – ewwwww) I’ve been a bit of a DIY skin-care kind of girl – no salons for me! This is more a combination of laziness and poverty than any sort of hard-core, homespun, anti-salon stance.

While I no longer make my own, I am a bit of a sucker for new off-the shelf products – so it was with some excitement that I purchased the l’oréal refinish micro-dermabrasion kit at Woolies for around $36. 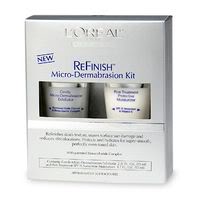 Now that I am rapidly entering old hag territory, I’m noticing some fine lines (or “expression” lines as people in denial like to refer to them) which I am keen to diminish somewhat – thinking that if this worked even a little, I would actually lash out and have it done professionally.

The kit comes with two 60ml tubes of “stuff” – the Micro-Dermabrasion Resurfacing Exfoliator (Step 1) and the Post Treatment Optimising Moisturiser Care (Step 2) and instructions. The first thing I noticed when opening the tube of M-DRE was a distinct lack of the lumpiness I’ve come to expect from exfoliating products. It’s not dissimilar to a slightly textured moisturiser. I was mildly discouraged by the lack of lumps, but pressed on – putting little spots on my damp, cleansed face as directed by the lovely diagram (which I have reproduced below, or I will when get around to scanning it). 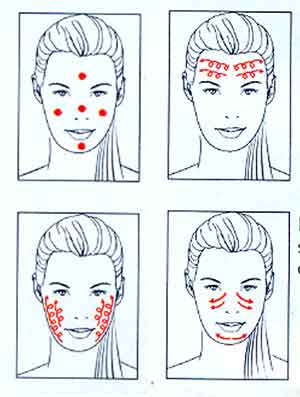 Then, being an obedient type of girl and following the instructions, I began to gently rub the M-DRE in a circular motion. Typically exfoliators/facial scrubs feel similar to rubbing sand onto your face (hey, I grew up at the beach), so I was expecting a similar sensation.

After about five seconds I came to realise exactly why micro-dermabrasion is so different to exfoliation … this didn’t feel like sand, it felt like I was rubbing Many Very Sharp Pointy Pins into my face.

I had a very nice image of what the Very Sharp Pointy Pin Device would look like all planned out in my head, however what was in my brain hasn’t translated very well into reality, so just imagine a small block with Many Very Sharp Pointy Pins in it – all sharp, pointy end up, or a tiny hedgehog with extremely sharp spines.

After two minutes I was able to rinse and apply the Post Treatment Optimising Moisturiser Care. Trust me, not very much in my life has felt so soothing as that moisturiser. And afterward my skin did feel soft and even glowed just a little (as it would, having just removed a couple of layers of skin).

So, I hear you all asking, have I mascochist-style, returned for more of the Many Very Sharp Pointy Pins of pain? And, more importantly, did it get rid of those pesky old hag lines?

Well, I’ve used it a couple of times now and it still leaves me all soft and shiny, but sadly, the old hag lines are still in evidence. I’m not sure if I will go the professional route, because I imagine that would be significantly more painful.

Maybe I need botox. Either that or come to terms with the haggishess!