After Nancy had been gone for around an hour, I received the text message below: 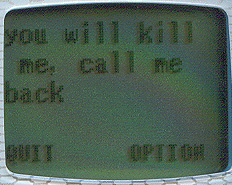 I suspected that she had either lost her wallet or broken her braces.

She had lost her wallet.

Her wallet with all of her travel passes in it (I’m hoping she did not have her keycard in it – not that she had any money in the account).

This is the second occasion that she has left her wallet on public transport. I estimate she has been told 546 times not to carry her wallet in her hand, but to keep it in her bag.

I have run out twice to hail passing buses and ask if they’ve had a wallet handed in. One very, very nice bus driver gave me a secret phone number for the depot, where a very, very nice bus depot man said he had four wallets there, but none that fitted the description I gave. He said he would call me back if it turned up, but not if it was after 11pm because he thought that was a little impolite. What a nice man.

Of course I don’t expect to see the wallet again.

Nancy is in not a little trouble.

Fenton suggested getting her a replacement surf-style wallet with velcro closure, I said making her carry a plastic bag around would be better. Other suggestions for creative punishments welcomed.

At least I have my fortnightly cakey treat waiting for me in the hardly fridge.

I have David Essex stuck in my head, how he got there I do not know.