Is there any experience in life that cannot be referenced to a Simpsons episode? I think not!

Yesterday I accompanied Fenton and Nancy to the dentist. A big hurrah! for a dentist who actually opens on Saturdays (well, every second Saturday) – which I think is sheer brilliance!

They both need lots of (dreadfully expensive) work – Nancy’s teeth are a mess (although mine were infintely worse as a child) and she will need braces (which we knew already). We’d started on the pre-braces orthodontist visits years ago – but then she went to live with her father & that all fell by the wayside. Nancy was worried about a tooth on the bottom jaw that had developed a slightly grey-ish tinge, which we assumed meant dead nerves and we were right – what we hadn’t counted on was that the nerves were dead because it is a baby tooth – the x-ray clearly showed a permanent tooth underneath it. The most bizarre thing about this is that Nancy has had multiple x-rays of her jaw and neither her former dentist or former orthodontist had picked this up (they’d even filled the baby tooth)! So the upshot is that she will have an extraction and the view of dishy-dentist is that the permanent tooth will pop up on its own. After the extraction (and the filling of one tooth), its on with the braces! 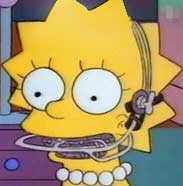 We’ll need to be madly saving to afford all of this – we’ve decided to not go the health fund route because we’d be putting a not insignificant sum per month & the amount you can actually claim back from any health fund for dental treatment is pitiful. Having done the sums, it will be far more economical to just pay for it out of our own pockets – so frugality will once again embrace those who dwell within the hardly haus (ahhhh poverty1, welcome back, I hadn’t missed you in the least). Fenton wishes he worked for the US arm of Compani – because they have a dental plan as part of their salary packaging.

1okay, I’m exaggerating a little, we won’t be *that* stretched – we’ll just have to restrain ourselves from indulging in wild spending sprees.