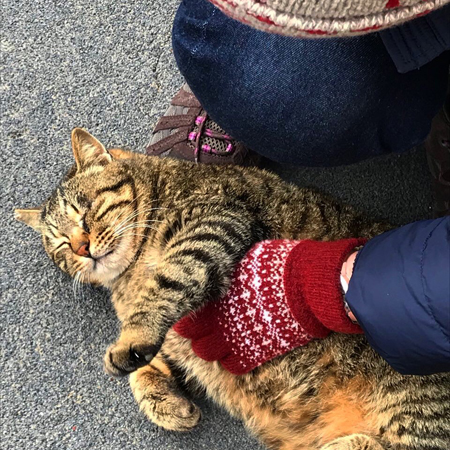 I had fine intentions of putting up the occasional post while I was away, but pretty obviously that didn’t happen! A couple of photos did make it to instagram, but that was about it.

But we’re back and Japan was, of course, wonderful. I absolutely would not want to live there for a number of reasons (insane work hours and insane patriarchy primarily), but it’s a lovely holiday destination.

Normally we fly Qantas (because, points), but we got quite a good deal this time for premium economy tickets with Japan Air Lines. I’d never flown with them before** and it was just like being in Japan from the moment of boarding – the crew being Japanese and the announcements being … well, announced … in Japanese first.

I’ve been trying to teach myself some Japanese in a pretty low-key kind of way and it was excellent to be able to recognise a word here and there. Last visit the total of my knowledge was pretty much “yes”, “no”, “please” and “thank-you”. Now I’ve about 10 more words under my belt – but hey, baby steps. Really, anyone who is bi-lingual or multi-lingual has my complete and undying admiration.

The break was all very relaxed and comfortable, which is precisely what I was after – lots of familiar places, exploring a couple of new-to-us areas. We spent four nights in Hakone, where we’d spent a night on the last trip and wanted to get to know a better, but we book-ended with Tokyo for Sumo, feasting and shopping.

Living in a fairly sub-tropical climate I’m not very familiar with “proper” winters. While it doesn’t really regularly snow in the areas we were staying, it was definitely colder than I’ve ever experienced in my life. We’d left behind temperatures of 35oC and above (95oF) and there were a few -4oC (~25oF) days^^. I was forced to bust out tights to wear as thermals under my jeans! It did snow very slightly on one afternoon in Hakone and I was absolutely wild with excitement. I don’t believe I’ve ever seen falling snow – it was so fluffy and magical – I need a snowy holiday in my future.

Back to enslavement and a big project kick-off tomorrow. I’m trying to take a positive and enthusiastic attitude in with me.

And I’m going to reset those 2019 intentions starting tomorrow – for reasons that are probably pretty obvious (spending, snacking, the usual suspects)!

** look at me talking like I’m some experienced world traveller like Joan or anyresemblance when I’ve been to fewer than 10 countries in my life.
^^ I realise this will be comically warm to some of you!