It’s rather exhausting being back at the Marie Celeste. It’s dreadful trying to get back into the whole work groove. I’m in the process of writing a very awful and complex report (which involves much maths/stats – urk! not my forte at all!), made significantly more difficult because our previous contractor did not document any of the work she did (there is a special place in hell for people who fail to document their work). So, I’ve been spending rather a lot of time engaged in work avoidance – namely reading /. and persuing various works on the literature network (which is killing my eyes). Gee, I don’t know where Nancy gets her tendency to pretend that deadlines just don’t exist.

Our contractor showed a whole lot of sense and failed to show up – which is a bit of a bummer departmentally, because it will take a whole lot of time to recruit someone else. It’s a buyers market at the moment and suitable candidates are pretty thin on the ground. Still our new dude seems very competent and quite pleasant – which undoubtedly means that he won’t be with us for terribly long! He’s already at Stage 2 of the Marie Celeste experience1 – this is where one walks around muttering, “but that doesn’t make sense!”

1Department Cool-until-you-are-in-it spent an idle afternoon developing the “16 stages of the Marie Celeste experience”. I started out at about stage 8 (Cynicism) and haven’t moved on from there. Other stages are The Shouting, The Crying and The Gaining Weight. I can’t recall the rest, although I know that Bliss was the last one (that, of course, occurs after you hand in your resignation).

Titles courtesy of The Hardy Boys: The Mystery of the Desert Giant 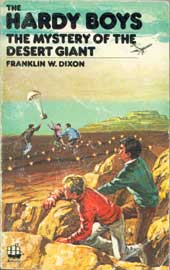