Well, I’m back after my brief hiatus (of both blogging and reading blogs) – which involved far too much work, disappearing internet connection and a drunken christmas party experience.

Much to my surprise, my promotion and accompanying $10K salary increase were approved. I even received a Christmas bonus (something almost unheard of at Marie Celeste). Yay for me! But truly, it doesn’t take overly much effort to remain at sweet end of the Bell Curve in Department Cool-until-you-are-in-it.

The Hardly Haus had the dreadful experience of losing our internet connection for several days. After testing we assumed our modem/router was stuffed (why technology hates me: part 34756) and returned it. The new one exhibited the same behaviour, so after a quite exhaustive (and exhausting) process of elimination, as a very last resort Fenton decided to unplug the dead printer from the network, and verily, we had internet connection once again. Stupid printer.

We’ve managed to acquire a cheapish second computer (well, a second for me, a sixth for the household – yes, the household of three people) on eBay – fabulous – except the seller sent it via courier, so we had to persuade Nancy to hang about and take delivery of it. The seller also failed to include a cable to convert the stupid, proprietary compaq video-out to hd15 – so the computer sits on the floor awaiting aforementioned cable or a new video card.

After spending a morning slaving to get work done for a lunchtime deadline, last Friday I toddled off to Marie Celeste’s christmas party and embraced the seemingly bottomless glass of white wine. For post-food “entertainment” we had a trivia contest. I was seated with most of the managers from my division (I’m a bit of a suck in that regard, but they are the people I tend to get on best with) and our sole purpose was to beat the smug bitches from Legal – which, rather to our surprise, we did – and there was much gloating (and refilling of the seemingly bottomless glass of white wine in celebration).

Afterward we adjourned to the Pontoon Bar where I embraced another seemingly bottomless glass of white wine. This was not a terribly good idea, as I spent a rather unpleasant time in the bathroom and was cared for and poured into a cab by the lovely person mentioned here. After a rather unpleasant cab ride, I spent the evening passed-out on the bathroom floor. That is the short version – I will not share the much more messy and icky graphic re-count.

I was filled with gratitude toward the lovely person who so kindly assisted me, so on Monday morning, I arrived with a floral token of my thanks. Perfectly normal and civilised, you would think? Strangely, the smug bitches in Legal did not appear to think so, because now the talk all over Marie Celeste (eminating from the smug bitches in Legal) is that the aforementioned lovely person and I are lesbian lovers (not that there’s anything wrong with that). All because I bought her flowers?!?! The smug bitches in Legal even grilled my lesbian lover about our relationship in a meeting. Honestly, this is the best, most hilarious and most bizarre rumour that has been spread about me – ever.

It doesn’t seem at all as though Christmas is tomorrow. We spent Thursday evening and yesterday afternoon knocking over the present purchasing – primarily Nintendo DS’ and games for the babies and secret stuff for Nancy. We had planned to spend today madly cleaning the grotty house, but the 38oC (100.4oF) day put a stop to that, so we lounged about and watched Seven Brides for Seven Brothers on DVD – which is just all kinds of wrong.

Titles courtesy of Hardy Boys: The Secret of Pirates’ Hill 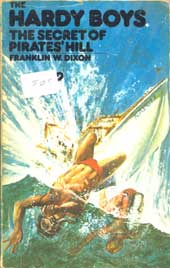