My post from yesterday appears to have been eaten. It dealt with how Fenton and I had planned to venture out to ikea to purchase a bookcase style thing to replace our current mismatch of furniture.
Two of these: 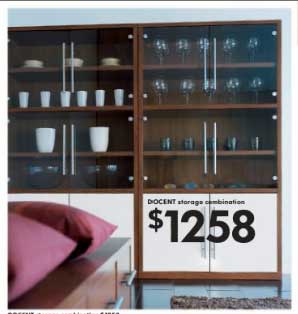 Perfect to hold the books and hide the printer and the router and the toys and the sun box that Fenton currently has his heart set on.

And how I was sadly struck down with a particularly nasty upset tummy and how this meant that we could not venture out. And how we assumed it was the universe trying to tell us not to be so spendy.

So today we laughed in the face of the universe’s hints and ventured out with the same aim in mind. I should mention that, in Sydney at least, ikea does not cater to the car-less – our closest store is not very well catered to by public transport, so that one has to cab it, or walk a round trip of almost 10 kilometres.

Apparently the universe does not appear to care for being laughed at, because when we went to order aforementioned shelves, the ikea salesperson informed us that there were none in stock, but that they expected some next week. I asked if expected meant that they would definitely arrive next week and she responded “probably not”, that it was more likely to be next year. There were, however, twenty-eight of them in Homebush (which is quite far away and even more impossible to get to). Could we order and pay for it at Moore Park and have it delivered from Homebush (as most normal stores would be more than happy to do1)? No, of course we could not, we would have to trek out there.

So, screw you ikea. You don’t want to make it easy for me to buy things from you, I’ll take my moderate disposable income elsewhere (although I have a suspicion that my stance will not last terribly long, given that there is no-one selling anything remotely similiar with the required depth).

We still haven’t quite worked out what the universe is trying to say. Perhaps “save some money you idiots & stick with the uggy2 furniture”?

1 Myer, DJs, Freedom Furniture for example, have in the past fallen over themselves to get things in for me from other stores.
2 uggyTM Harriet’s youngest.