Yet another soul-destroying day at Batshitcrazyorg, so i cheered myself up by buying a wee fishie after work. As yet un-named fishie also has the added bonus of (hopefully) appeasing the feng shui gods in the career corner (which happens to be my desk).

As yet un-named fishie looks a little like this: 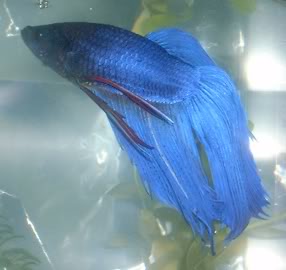 Because he is a siamese fighting fish (Betta Splendens) – according to the available literature, he does not need overly much space – so I bought him a rather nice large glass cookie jar at Woolworths to live in (at least until we decide if we want to get a bigger tank with more fishies – naturally not another Betta).

I must say, as yet un-named fish has cheered me a little – I am looking forward to his acclimatisation to the water temperature, so that I may put him on my desk (at the moment he is still by the sink).