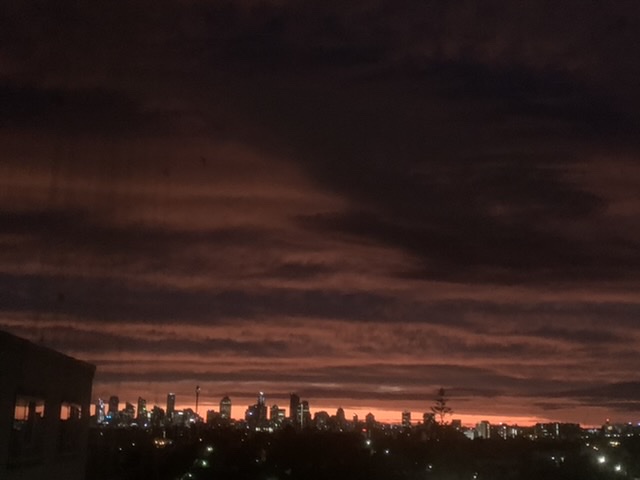 I mixed it up a little at lunch today and attended a freebie pilates class over zoom which was put on by one of the local councils.

It was fun and quick and I would definitely do again, though I suspect I will be quite sore by Wednesday – I’ve done almost the bare minimum of exercise in the last 10 weeks. And probably not much more in the prior 10.

I haven’t done pilates for a couple of years now but thankfully could follow along okay.

I think the real benefit of signing up for a live class is that I’m much more likely to show up for it, rather than dither about putting off working out along to a video. This is the case for most classes – exercise or otherwise. There’s probably some psychological things to unpack here!

I’m trying yoga later in the week – all low key and no pressure to do headstands!

Last weekend I spent quite a bit of time making a toile (some people call it a muslin, but I like saying “toile”) of a pair of pants for Don. For the non-sewists, this is kind of a mock-up of a garment using inexpensive fabric which you sometimes make to check size and fit. The toile lets you make adjustments to the pattern and avoid possible mistakes before cutting into your usually more expensive final fabric.

I chose the Fremantle pants pattern from elbe textiles. I’d planned to get the A0 size printed for about $5 per sheet, but reconsidered and glued the A4 sheets together while sitting in the sun, listening to a podcast. Once that was done, I traced the pattern out on tissue paper. This is mostly so I can reuse the pattern in different sizes, plus it’s much easier to adjust on tissue.

I pulled out an old single bed sheet for the toile. Instead of whipping the pants up really quickly (generally you’d smash your toile together fast), I decided I was going to make the whole thing properly. This would let me suss out the technique and get some practice in for the final garment. In addition to the sheet, I used some bias-binding tape I’ve had kicking around for years and an old pillowcase for the pocket lining.

The instructions were really clear and simple and it all came together relatively quickly. I was pretty pleased with my finishing. I still need to work on the curves with the overlocker though I’m improving slightly. I free-styled the bias tape finishing for the pockets and would totally do that again. I hated the technique for the waistband, so abandoned that and did what I’m accustomed to – I still need to add some rows of stitching to that. 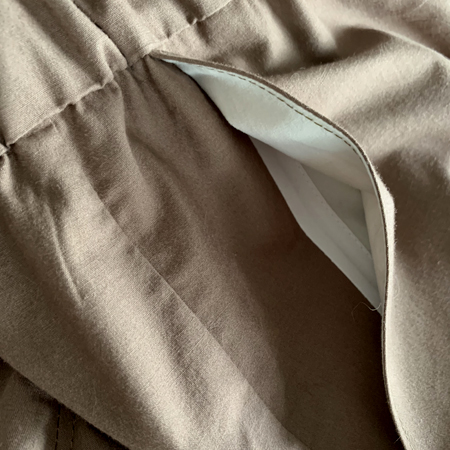 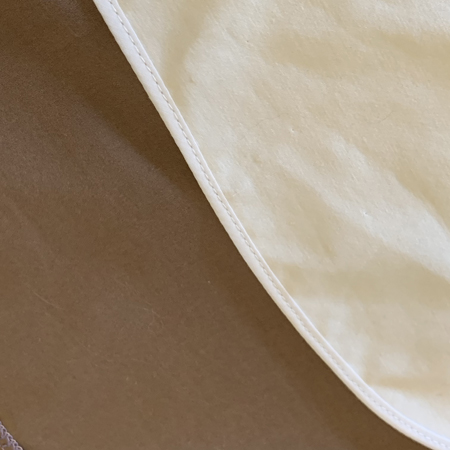 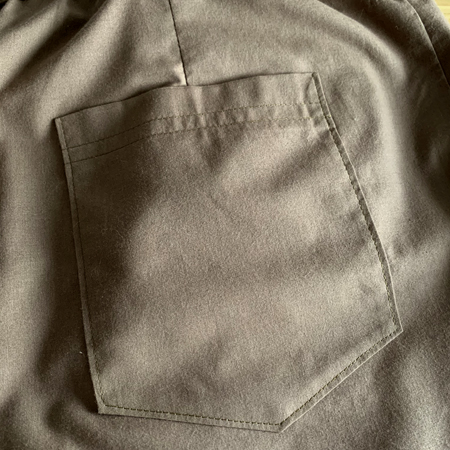 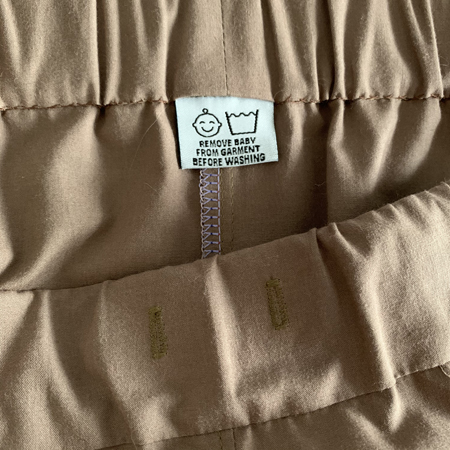 How wonderful is this label? Purchased from JosieButtonsAU on etsy

Don was golfing and not available for progress fittings. What could possibly go wrong? 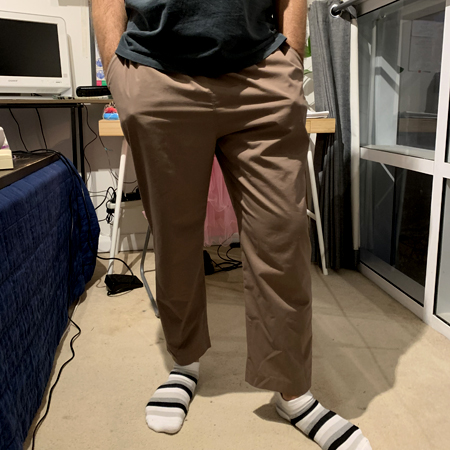 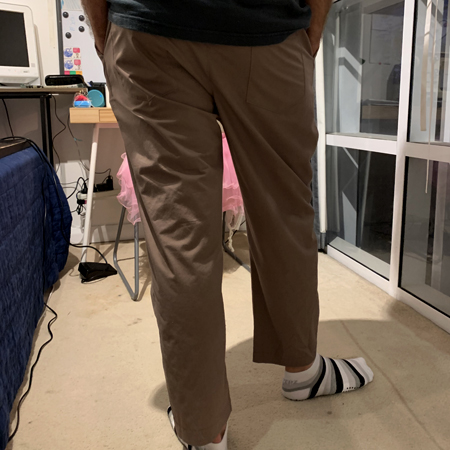 Verdict: baggier than expected, but weirdly tight across the top of the knees when walking. Much shorter than expected (should have measured length and not relied on the photo!). The design of the slash pocket depth seems to be proportionally off a bit. The front pockets aren’t as deep as I’d personally like.

When comparing to a pair of Don’s favourite pants of similar style, the leg width is similar, but the crotch on the fremantle isn’t quite as deep as on the favourites – maybe that’s what’s causing the weird knee tightness?

Think a unisex style is likely to not give me the results I’m aiming for,so I’ll be trying a men-specific pattern. This took me about 6 hours to choose today – but I got 3 patterns for $12 so, score!

And maybe I can steal the toile for gardening / painting / cleaning / messing-about pants? 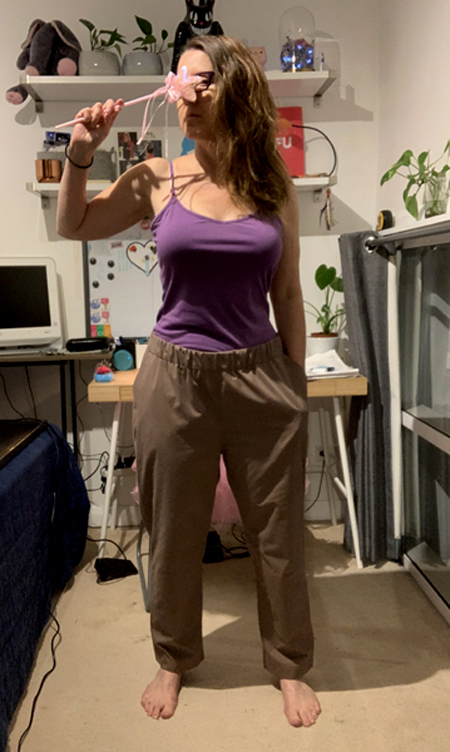 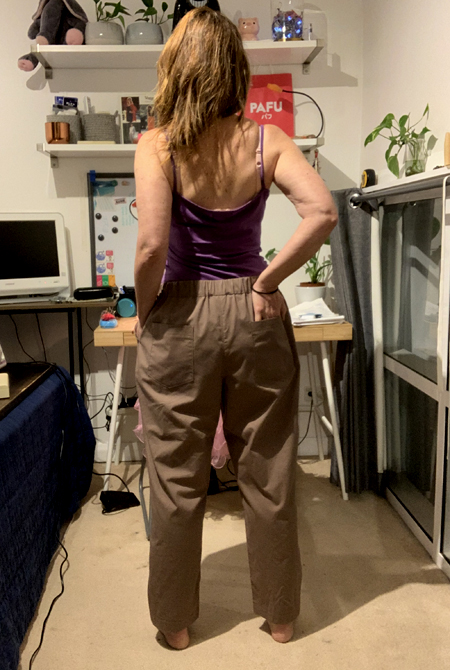 Might need to reduce the length of the elastic in the waistband just a smidge!

Whatever happens with it, I really loved the process. This low-stakes sewing has been super-fun!

^ slight pivot and going with the day of the year, rather than the date. Also – where did those 152 days go?!

A little over a month ago when I was Enthusiastic about planting things, I ordered Dragon Tree and Stone Pine** seeds and just as I’d pretty much forgotten about them, this week they arrived! 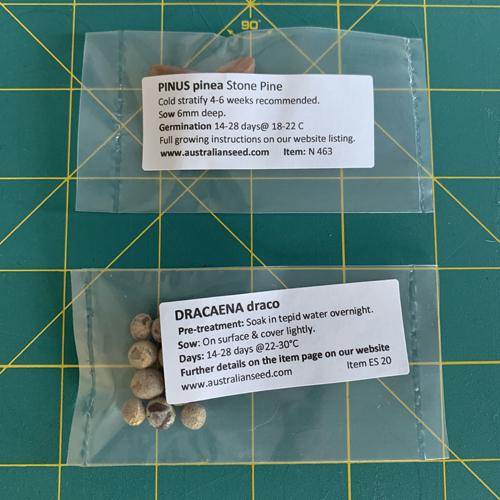 Like the maple, the stone pine requires cold stratification – though for not quite as long. Both the dragon and the pine germinate in the 22oC range and as we’re about to hit winter, I briefly considered holding off starting the process, but nah – carpe the whatevs and get on with it! I’ll keep them warm somehow. I’ve mentioned before that Sydney houses are normally quite freezing – architects / house builders / developers appear to collectively believe winter is not a thing that happens here. 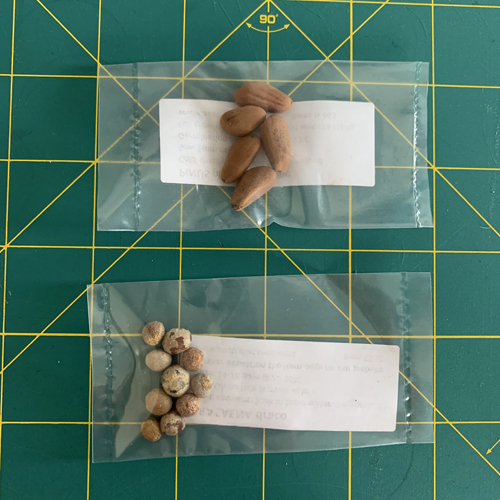 ^^ you’d not think it, but oftentimes settling on a title takes approximately 15 times longer than the actual post

** I adore stone pine trees almost as much as I adore maples. On my very first morning in Rome on my very first overseas trip at the comparatively advanced age of 40, I was on the Palatine Hill looking over the Circo Massimo – there was mist, there were stone pines, there were ancient ruins – and I wept at how beautiful and amazing and magical and wondrous it all was. I totally hid this from Don, because at that time I totally had a vision myself as way too cool and worldly for such displays of emotion. Honestly, what an idiot. Now I freely weep at every possible opportunity.

(ack! must not have hit “publish” on this on Tuesday evening)

How very simple it is to lose the habit of daily posting!

How admirable are those that keep it up for the long haul!

How mystifying that I managed to keep it up for over a year!

I spent a good part of the weekend sewing and greatly enjoyed the process – even if the output was a little wanting. More details on that when I’m not posting on my phone from bed.

Before we get to that, I will say that if you are a sewist, I can highly recommend two new-to-me tools that have made a significant and positive contribution to my experience. 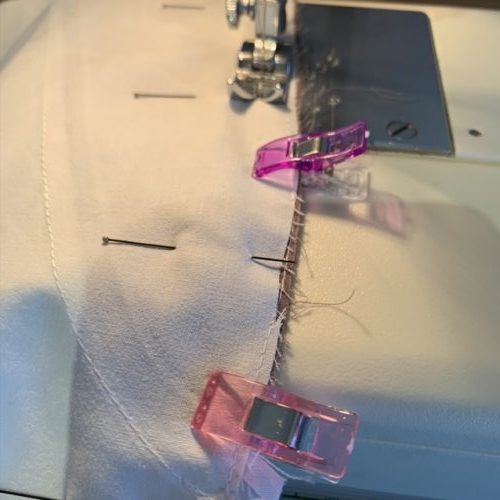 Absolute magic! The clips hold tight and the pins are great for fine or tightly woven fabric, fine enough to accidentally sew over and can withstand the iron.

Need to get myself more of both!

I’m not entirely sure how it got to be Friday so quickly, but here we are!

Work has been work has been work. Slightly on the tedious side and while I’m adoring remote working, I’m feeling pretty unstructured and chaotic. I’d like to knuckle down and try to become a little more organised.

We were advised this week that we’re likely to be remote until at least the end of Project Sulfur, which at this stage is the end of September. So I’d better get on that!

I failed to list action items for last weekend and felt like I accomplished nothing. This probably wasn’t true, but this weekend I intend to make a muslin/toile for a pair of pants for Don and watch some improving videos, amongst other general pottering and blog-catcheruppering. 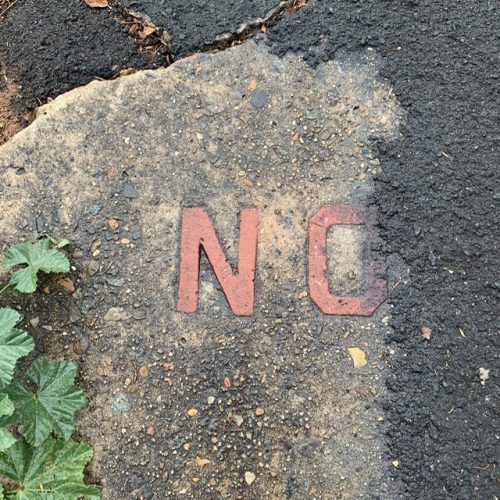 Spotted on this morning’s walk and very much summed up my approach to work today.

As you’re not doubt aware, I am totally here for the tracksuit pants! The ability to wear trakkies all day is surely one of the top 5 things about remote working**.

So I was delighted and interested to read No sweat: how tracksuit bottoms became the height of lockdown fashion on The Guardian a couple of weekends ago.

This, however was the stand out for me:

But not everyone is convinced. Last week, Adam Tschorn, deputy fashion editor of the LA Times , wrote an impassioned plea against the rise of the tracksuit bottom in our work-from-home environment. “Please, can we put away those sweatpants, ratty, grey, decades-old collegiate sweatshirts and obscure minor league baseball caps, and start our workdays looking like we deserve the pay we’re lucky enough to be earning while the world around us burns?”

There is so much to unpack here. The idea that what we wear is any sort of indication of our capability, productivity or value. The idea of an old white privileged man dictating what is appropriate to wear in our homes.

But most mind boggling and hilarious of all is the idea that someone who dresses like this: 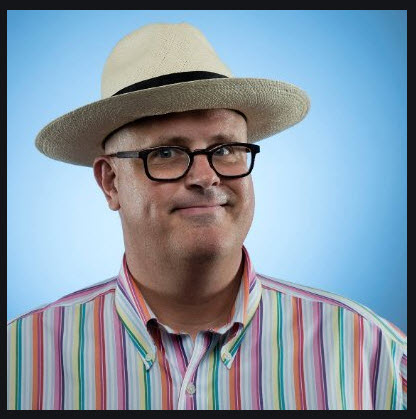 is in any way qualified to comment on fashion or style.^^

** other top things: fresh air! no commute! cats all day! (I know that’s only four things)

Hoping to save precious weekend time, I ducked out to do the grocery shopping at lunch time today.

In good news, it was relatively quiet and people were appropriately socially distancing. Hand sanitiser and trolley wipes were plentiful.

In less than good news, it takes 2-3 times longer than in the Before Times because you need to allow time and space for everyone to select their items. Some people can linger for over 5 minutes choosing sausages.

Hot tip: cue up a decent audiobook or podcast for these occasions.

Despite the relative ease of the process, I felt as if I needed to sit in a quiet room and decompress for a bit – perhaps even (badly) meditate. Unfortunately I only had time to smash down a sandwich before jumping on yet another call.

Must allow time for that after the next trip.

The fabric for my second pair of loungey pants also came from that stash of flannelette originally intended to become cosy quilts for the babies.

I used the same pattern as the red pants, but shortened the crotch length quite a bit – still nowhere as short as the pattern, which assumes the top of your pants should hover somewhere around your pubic bone. I also added the same fat waistband, and huge pockets because neither waistband or pockets (giant or otherwise) were in the original pattern.

I only had 2m of striped fabric which didn’t give me enough for my beloved pockets. Fortunately hoarding came to my rescue once again! I found a pair of Joan’s old pyjama pants in the rag bag which were absolutely perfect. I’m so pleased that can’t stop looking at them and forcing Don to admire them. 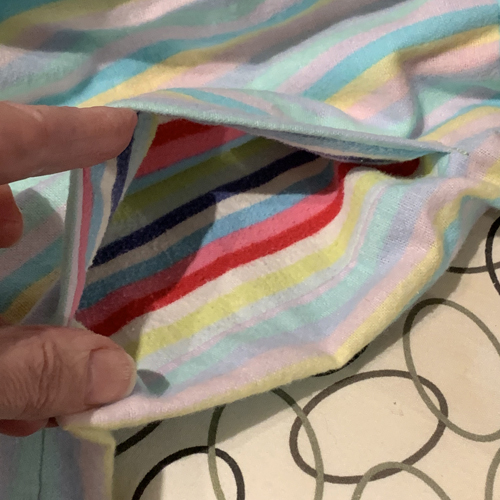 seriously – how good are these pockets? 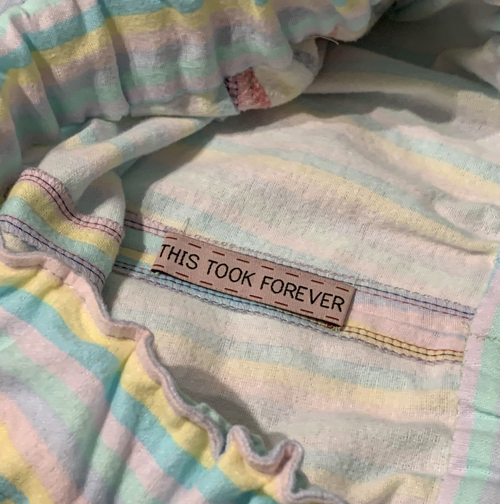 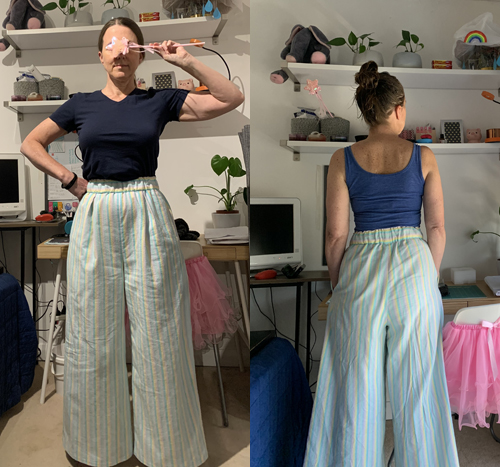 I don’t know how the sewing bloggers do it. It took ages to get even these mediocre ones.

Notes: I’m not huge on the look of the waistband. I love the height of it, but not so jazzed by the gathers the thick flannel makes. Otherwise they are incredibly warm and comfortable and I love them. I don’t usually wear striped pastel garments, but these are cheerful and not likely to ever leave ThePalace(OfLove).

Next pair: I want to take the legs wider so I can incorporate more pleats. 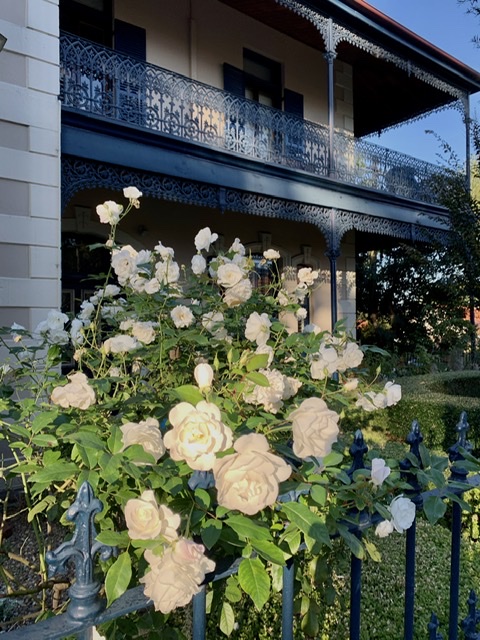 How about those roses?