A couple of weeks ago as part of the ongoing why-do-i-have-so-much-stuff-make-it-stop purges, I decided to make inroads on the crafting stash and attacked a small tub containing bits of trim, ribbon and elastic. There are other similar boxes containing buttons and thread – but those are tasks for another time.

This box was filled to overflowing – the majority of space being taken up by a whole mess of sydney swans member lanyards from 2010 to 2018. I have absolutely no idea why I’ve held on to these for so long. I guess like most things, I thought they might come in handy or could be used for *something* crafty. 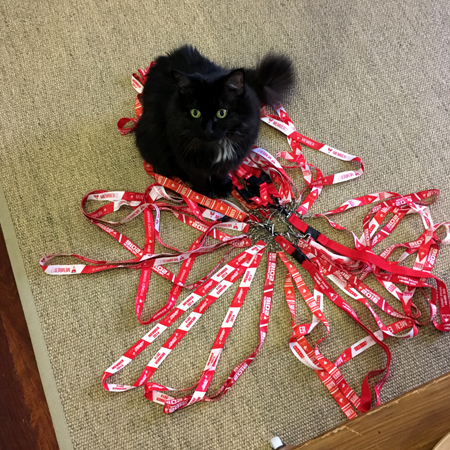 When I saw them laying underneath NewKitty, I had one of those rare^^ flashes of inspiration.

I had a hovsta frame leftover from Xmas when I framed this adorable mix CD Joan made for Joe/Frank when they were both very small. We’d forgotten all about it and I’d re-discovered it in a stash somewhere (yikes – so many stashes). 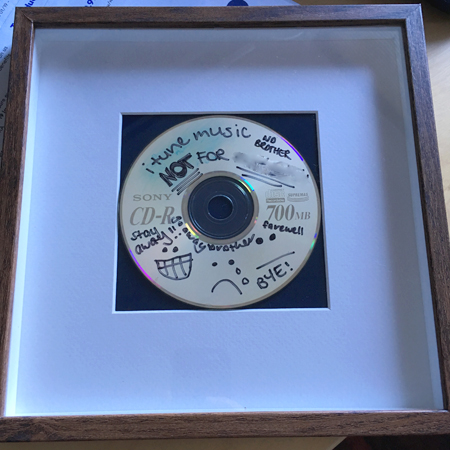 Everyone was amused and delighted by the gift. Very much recommended if you have similar kicking about.

Hmmm … what if I framed the lanyard ribbons (tape?) by stacking them under the matte? 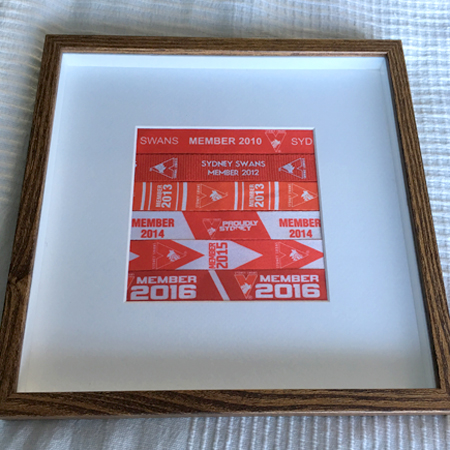 There’s enough of the ribbon (tape?) that I’ve made one frame each for Joe/Frank and Bessie and set some aside for another for ThePalace(OfLove). And grabbed more frames to cover the period 2017+. We’re missing lanyards from the early years of our membership, so rather than glue everything down permanently, I taped the edges of each ribbon to the backing with washi tape## to allow for future re-arrangment.

I’ve set up an eBay search for those missing years: 2007, 2008, 2011 (we skipped our membership in 2009). I’m pretty certain ours were discarded long, long ago (though this does not explain why I have that 2011 gap). I’m also certain that when I pay some astronomical amount to acquire the missing ones, I’ll discover that I didn’t throw them out at all, but stashed them *somewhere*.

I’m quite delighted with this cleverness!

Maybe there is hope for my brain yet?

^^ rare these days because my entire brain-space has been consumed by SML. I’m aiming to put a stop to that – hence the increase in blogging frequency, but that is a post for another time.

## washi tape is truly, truly amazing and magical and has 87 billion uses.